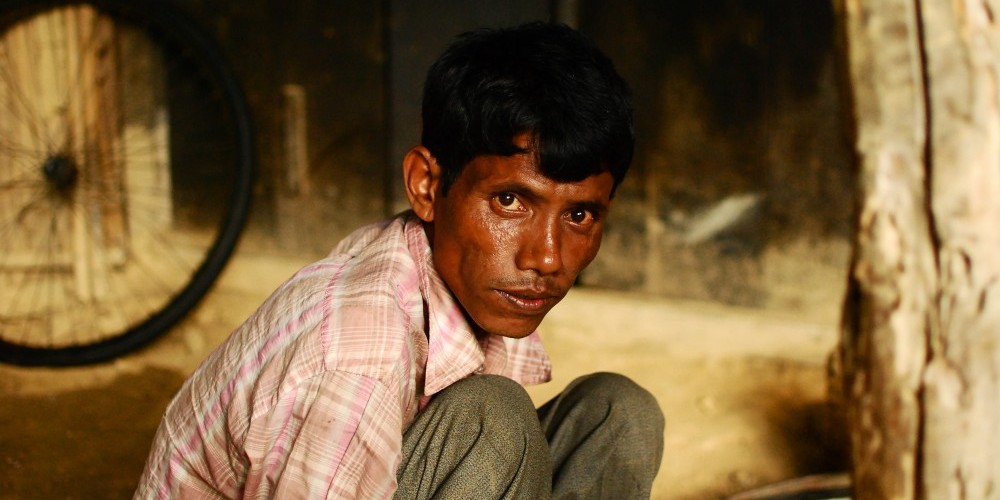 A taxi driver looks across his shoulder, a violin maker presents his product, a man fixing a puncture looks up from his work and into the camera’s lens…  It is difficult to define what one captures in a portrait, especially when the photos are so candid, taken while rambling through the streets of Bangladesh and Northern India. Often, what Sebastian Strangio discovers is himself. Subjects look directly at him, solidifying his own presence in the photo. The looks range from inquisitive to accusing, bashful to pensive. Some subjects are uncomfortable before the lens. Yet no one is willing to appear vulnerable to posterity.

The photos do not offer a window into the trials and tribulations of Bangladeshis, nor do they purport to pry open the human soul. Rather, the images speak for Strangio. He is a foreigner in their midst, carrying an obtuse machine, documenting the movement and colour of their lives. The subject does not reveal himself to the photographer, instead the opposite occurs, the photographer reveals himself to the subject. What follows are smiles and intrigue, serenity and suspicion.

In travel there is no hope for anonymity. It’s often foolhardy to try to blend in or adapt so entirely as to go unnoticed. But rather than scorn the fact that travellers are outsiders, why not embrace it and regard it as an advantage? It just might be the source of all the pleasure of travel. One is forced to confront not only oneself, but also the judgemental and inquisitive stares of others. To accept that one is in an intruder in people’s lives, to accept that to travel is to skirt a vague line between purpose and purposelessness, requires a certain degree of humility. With these images, Strangio tows that line. He makes us feel the uncomfortable nag of knowing oneself to not belong, and shows us just how beautiful that can be.

Sebastian Strangio is a freelance foreign correspondent based in Phnom Penh, Cambodia. Since 2008, he has reported widely on politics, human rights, business and environmental issues from across the Asia-Pacific. Click here to see more of his work.