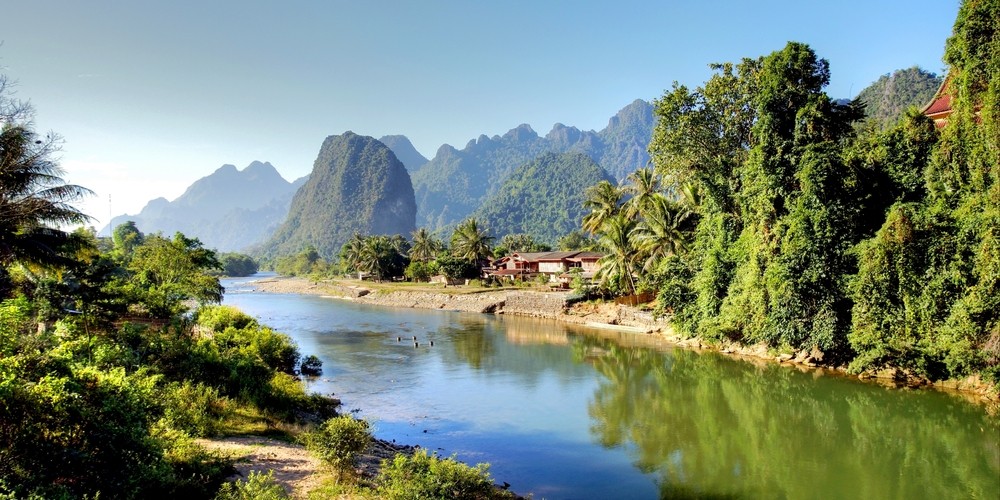 I’d smoked too much opium the night before.

It was why I was reluctant when Hilde asked, in her heavily accented English, “We smoke marijuana tonight, yes?”

“Oh yes. It is our last night. The time is good. And this place? Is good also, yes?

I looked where she did. A camp on a riverbank. A thatch-roofed platform facing the water. Huge trees bound with fig vines pressed in on us; frog calls rose above the sounds of the camp boys hammering together the rafts that, next day, we would pole out of the jungle to our rendezvous with the truck that would return us to Chiang Mai. After four days trekking through the Golden Triangle, where Thailand butts up to Burma and Laos, the first beer would taste sweet. There were twelve days left till the end of the 80’s; I had been in Thailand a week and had three months in South East Asia still to go.

I reconsidered her request. Time and place were indeed good. My companion, perfectly nice. No desire there. The very tall, very blonde Hilde from Hamburg simply not my type. Nor I hers, no doubt. She was fleeing the sudden dumping by her fiancé of seven years. My marriage had lasted exactly half that time and had ended, to mutual relief, on Christmas Day fifty one weeks before.

Hilde and I had formed an Anglo-German alliance against the Swiss. The two other members of our group, Hans and Dieter, trekked in matching pink and black jumpsuits and paused only for photo opportunities. While Hilde and I gasped at vistas, explored villages and swam in mountain pools, they clicked and marched. The night before they’d each placed their head on the pillow and the opium pipe to their lips, to have their picture snapped. Back in Zurich, they’d be able to plead what would later be known as ‘the Clinton defence’. They hadn’t inhaled.

I had. A lot. It had not gone well. Hence my reluctance. But Hilde’s pleading persuaded me. We were allies, after all.

Buddy. Not his real name. But his real name wasn’t his real name either. Our guide was Shan, a hill tribe continually at war with the Burmese government. He’d been a fighter, though mainly a mule, humping sacks of opium around some of the same forests he now guided tourists through. At night, stoned before a fire, he’d break into fist-pumping chants of ‘Shan People’s Army’. His favourite song was, ‘Buffalo Soldier’. I liked him. All he wanted was for his clients to have a good time.

Here’s what had happened with the opium. I blame it on De Quincey’s ‘Confessions of an English Opium Eater’. I blame it on Coleridge. I’d sought transcendence, Xanadu, my very own sunless sea. Before the trek, I’d figured I’d only do it once so I might as well do it right. But two pipes the first night of the trek had just made me sleepy and irritable.

I’d transcended alright. Buddy had only seen the outward manifestation in which I’d leaped from my mattress, ran to the entrance of the platform hut, jiggered there for nearly a minute like some crazed disco dancer before projectilevomiting into the compound below. Dogs came and ate my vomit. They were real – unlike the donkey who rushed at me with big yellow teeth as soon as I lay down again. He’d been a hallucination, my solitary one. Buddy had given me cold tea to drink, and had sat by me for an hour while I shook.

He’d explained the phrase that first night. It translated loosely into something akin to Kurt Vonnegut’s, ‘So it goes’. An acceptance of life however it unfolds. It was exactly the kind of thing I’d come to Thailand to absorb, and I tried to say it with just Buddy’s casual shrug.

After dinner, the sudden night fallen, the Swiss already tucked up in their sleeping bags, Buddy came to where Hilde and I sat on the edge of the platform before a campfire, cocooned in its flickering light. Beyond it, we could hear the river’s rush and hundreds of frogs seeking mates.

Buddy lit the bong, a simple cylinder of bamboo. He took a huge hit, passed it to me. I took a smaller one, over his protests. Hilde matched me. Another head-engulfing hit from our host, an even smaller one for me. Yet as I gave it to Hilde for her second toke, I felt my neck muscles, tight since the phantom donkey, ease. Interesting, I thought.

And we were. Better than. Actually, for ten minutes we were bloody marvelous. Frogs still called from the riverbank but now in Monty Python voices: “Ooh, that Chris, isn’t he a clever lad?” Don’t know what they said in German but they made Hilde roar. Bamboo exploded in the fire when each sealed chamber of a log was breached. We shrieked at the whooshing sparks. We giggled continuously. This, I remember thinking, is going to be great.

And then she said, “This is very strong, yes?”

There’s that moment when you look at someone who’s about to fall off a cliff and you think, if only I can reach out and catch them. So I said, as I reached for her, “You’re fine. Everything’s fine. Don’t fall.”

It was Timothy Leary who defined ‘The Rule’ of Set and Setting. He was speaking about LSD but it applies to any strong drug: (Mind) Set – be in a good head space, no major life hassles hanging over you. Setting – be somewhere familiar, calm, with people you know well and trust.

We’d both been in Thailand less than a week, fleeing the car crash of long term relationships. We were strangers in the middle of the Golden Triangle, six hours hike from anything close to civilization, with a Buffalo Soldier and two Switzers in pink and black jumpsuits.

Reader, we were fucked.

There was a choice to be made – either both dissolve completely and throw ourselves on the mercy of Shan and Swiss. Or one of us had to take over.

Hilde was ten years younger, had rarely strayed from home, and her fiancé had just dumped her. I, like a racehorse in England, had ‘form’. I’d done this before, seen people through. Taking a deep breath, I leapt into Rescue Mode.

I’d been a professional actor for twelve years. Grass tended to exaggerate my performer. So I led her away from the fire and the frogs and began to juggle – literally, three mangosteens. I told jokes. I put on funny voices. Not every choice was a good one but for a while I thought I was getting through.

Until she spoke to me in German.

Eons before, I had briefly studied it at school. I thought that I didn’t remember much. Yet inebriation, I’ve discovered, improves language skills. I was certainly able to understand Hilde when she told me that a) she was going mad, b) Buddy had laced the grass with opium, and, c) the Buffalo Soldier had done that for his own dark reason.

I couldn’t understand exactly what that was – were we to be sold into white slavery? – because I was as stoned as I’d ever been in my life, with a certainty that I was somewhere near the base of that particular mountain and there was still a long, long way to its summit. All I did know was that she was in even worse trouble than me. She kept replaying her fiancé’s dumping speech. She wanted to go – now, right now – to an airport and fly home, beg him to take her back. I tried to dissuade her, tried to get her to focus on the beauty of the stars, kept up my act – only to watch a new idea come onto a face that, if I looked at it too long, morphed into various former girlfriend’s, up to and including my ex-wife’s. And what became clear was that it wasn’t Buddy who was the villain now. It was the Englishman.

Actually I believe the exact phrase was: ‘Der Scheisse Englander.’

Hans and Dieter emerged from their sleeping bags. They’d both done military training that included first aid. They talked to her calmly in her own tongue, made her sip water. I crept away to sit before the fire.

And that’s when my hallucinations began.

I remember being a little miffed. I didn’t have a problem with hallucinations. Bring ‘em on, was my usual cry. But three hours in? While Monty Python frogs gossiped about my every failing and a girl wailed in perfectly comprehensible German about the shitty Englishman who had drugged her in order to seduce her?

De Quincey wrote, of the hallucinatory state,  ‘If your life is cattle, you will dream of cattle.’ What was my life, then? I’d just completely failed my first major adult test. I’d screwed up a marriage. I had, no matter how I tried to divvy up the blame. And why had I come to Thailand? Not really to take drugs, the accustomed and easy shortcut to transcendence. I wanted a philosophy. I wanted a new way of being. Damn it, I wanted to become a Buddhist!

But that wasn’t the faith I’d been raised in. And was it Leary who also said, ‘Wherever you go, there you are.’?

There I was. 33, divorced, lost every which way, three thousand miles from home while the giant tree before me, covered in creepers and fig vines, transformed into a vast Michelangelo sculpture of Jesus being handed down from the cross. I would have liked to admire it, the way I’d admired his Pieta in St Peter’s, his David in Florence. But I couldn’t, because it was moving. I couldn’t, because Jesus was being uncrucified, and was about to be laid out on the ground between me and the fire. I knew he would rise then, speak to me, place his hand on my shoulder, like Buddy had. Earlier in the day, we’d stopped to help a village boy with a broken arm. I felt pain now in my own arm. Was I meant to heal? Was that what I’d come to Thailand to learn? Lord?

I jumped up. Even defamatory Germans were better than a Damascene encounter with the Saviour. I needed Hilde now and, fortunately for me, she’d had another change of mind. The Swiss were too straight to understand what she was going through. She needed me too.

It was time for the return of Der Scheisse Englander.

For a while, I lay beside her, outside her sleeping bag, talking her down. I had to not look at her because, she said, my face turned into Jack Nicholson’s ‘The Joker’ from ‘Batman’, and this was not helping. Meantime, Buddy – who said that nothing like this had happened to him in seven years of guiding – was very upset, as I was for him. He brought a sweet solution, a cup of sugar mixed into a very little water. Like a poison taster at a medieval court I had to taste it for Hilde before she would drink it. Bizarrely, it worked and she sank, muttering, into a deep sleep.

I returned to the fire. Four hours had passed since I’d first sat there. The Frogs were again largely speaking frog and if there was still a hint of Michelangelo about the tree, at least Jesus was no longer going to descend from it and join me.

Buddy did. We sat in silence for a while, staring into the flames.

C. C. Humphreys is an actor, playwright and the author of twelve books of both historical and young adult fiction. Since 1989 he has largely sought transcendence through Bowmore Mariner. This is his second piece for Errant.