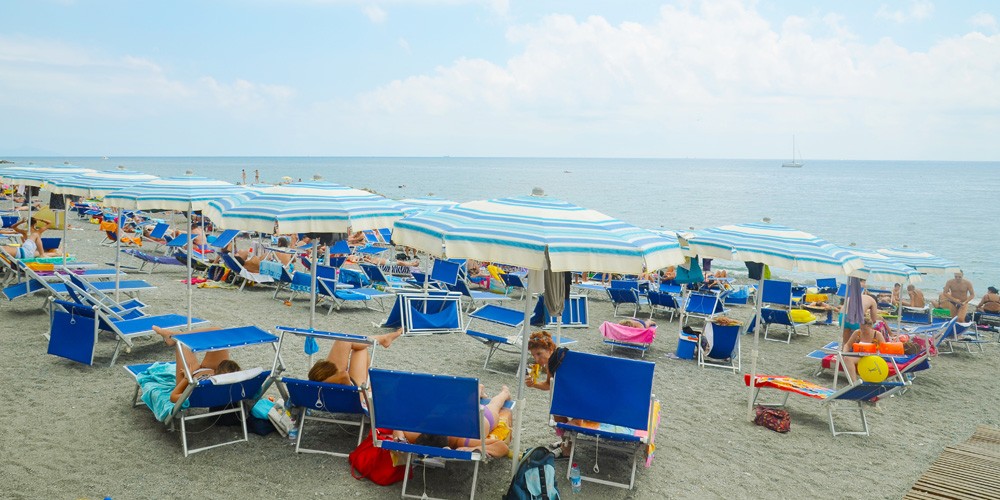 Italian Beach on the Auction Block

Stefania Longheu stands up from the lifeguard’s chair and makes her way up the beach towards Calabasciu, the kiosk that she co-owns with her brother Salvatore. She threads her way through the blue-and-white striped umbrellas that mark Calabasciu’s allotment of sand, crowded with beachgoers lying under their shade: local customers from Cogoleto, vacationers from Milan and Turin, and familiar day-trippers from Genoa. Swimsuits and pants and towels and purses hang off the umbrella stems. Children play. The sea is as still as glass and glittering with salt.

Seagulls circle and caw over music coming from a radio, the chattering of families over lunch, the hum and whine of the coffee machine, and the metal clunk of the barista emptying grinds. The regulars lean on the sun-warmed counter of the bar, swallowing small white cups of dark coffee. Calabasciu is their place to go that isn’t work and isn’t home, an open-air social centre where there’s always someone to talk to. “Ste’s place,” they call it. Between the heat, the doubled glare of light off the water, and the layer of salt on their skin, everyone is relaxing–everyone except Stefania. From seven a.m. to seven p.m., and Saturdays until three in the morning, Stefania is behind the counter or in the lifeguard’s seat. Even as the circles under her eyes hollow out, she works.

She’s wearing a sarong and a brown tank top with a logo of a pair of swim trunks and a bikini hung out to dry. The Calabasciu slogan crosses her back: Toglietemi tutto, ma non il mio Calabasciu. “Take everything I’ve got, but don’t take away my Calabasciu.” The shirt is from 2010, but the sentiment has acquired a new twist. Since the summer of 2011, Italian newspapers have been talking about the Bolkestein Directive, a law that the EU passed in early 2006. The directive aimed to encourage market competition: to provide for the free movement of services across EU borders by removing such national processes as complex or discriminatory permit structures. But critics argue that by changing business legislation, the Bolkestein also adversely affects national legislation–like workers’ rights–in favour of the right of the service provider. For Stefania, this means that her license to operate Calabasciu, the license her father paid 120,000 euros for in 2002, will be auctioned off to the highest bidder in 2016. If the siblings can’t compete, the business they’ve created over the past decade will disappear. Stefania and her family aren’t alone–the owners of some 30,000 stabilimenti balneari (bathing establishments) across the country are also facing the public auction of their operating licences every four years under the new law.

The spokesgroup for the owners of these businesses, the Sindacato Italiano Balneari (SIB), organized a protest in April 2012 to protest implementation of the Bolkestein. Stefania, who has only been to Rome a few times, decided to take part.

“My parents think I’m taking a vacation just by going to Rome,” she said, “because they’ve never allowed themselves anything. But I have to go.”

She packed an overnight bag with a red Salvataggio (lifeguard) t-shirt and a whistle.

In Rome’s governmental district, EUR, a man in a black windbreaker and a grey beard walks up a sloping sidewalk. Green trees lean over him, and in his arms is a meter-tall papier-mâché construction. He’s carrying Mario Monti’s head on a stick.

Monti, the appointed technocrat who has headed Italy’s government since Silvio Berlusconi left in November 2011, is no favourite here in Rome. He’s slashed social spending and complies eagerly with European Union norms, and now this man is carrying Monti’s head to the SIB protest.

Although regional differences are strong in Italy, all of the country’s stabilimenti balneari follow the same tradition and fall under the same national regulations. From the first of June to the fifteenth of September, the stabilimenti rent umbrellas, lounge chairs, and changing cabins by the season to their clients. Their owners are also obligated to provide the swimming public with a lifeguard as part of their general licence, which can include operating restaurants, bars, and even discotheques on the sand. Some stabilimenti are fixed, permanent buildings and others (like Stefania’s) must be assembled and dismounted on the beach each season. Many other details vary by municipality, but one other thing is the same across the country: none of the stabilimenti proprietors actually own the beach land on which they operate. They only possess an operating licence; if this is revoked, a stabilimento would cease to exist, whether the owner has invested hundreds of thousands in removable structures or millions in an actual building.

The crowd follows Monti’s pink head up the sidewalk and through a scattering of cars and policemen standing casually in the parking lot between the congress hall and a palm-filled park. On the steps of the Palazzo dei Congressi is a man wearing nothing but flip-flops and a pair of old-fashioned striped bathing trunks. Blue straps cross over his shoulders; the top of his head shines through his short white hair.

He puts down the sign he’s carrying, La Storia Siamo Noi (We Make History), to beg Monti’s owner with both hands: “Lend it to me!” he shouts. “Come on, just for a second.”

As the two begin to argue, Stefania moves into the lobby and closer to the roar emerging from the auditorium. Inside, hundreds of people in red t-shirts are blowing lifeguard whistles and vuvuzelas at the stage. Neatly ironed middle-aged men, women in heels and sneakers, young men with shag haircuts—all with tanned, lined faces, wearing sunglasses indoors and shouting: “No to the Mafia on our beaches! Alla faccia!” (Up yours!) Some wave black and white pirate flags and stomp out a three-part chant: “De-ro-ga.” Ex-cep-tion.

An exception to the Bolkestein could exempt the stabilimenti from the four-year auction cycle, and protect future tourism along Italy’s seven thousand kilometers of coastline. Frits Bolkestein’s free-market doctrine holds that periodically auctioning these operating licenses off to the highest bidder will make the system more fair and competitive. These licenses do tend to stay within families and be handed down, generation after generation, and they’re severely limited in number in a country where jobs are scarce.

People worry that if the stabilimenti licenses go up for auction, the Italian mafia will have an open channel to new avenues of money laundering. There are also rumours of Russian investors, of a group that’s already offered one small northwestern town a brand new sea promenade in exchange for licences to manage the whole beach and its establishments. Others say that the multinationals will come in and reduce local entrepreneurs to low-wage slaves, turning the beaches into Italo-Disneylands.

Stefania slips between the protestors and makes her way towards the first row, where Giovanna Damonte is sitting. Giovanna was Stefania’s first boss; all through university, Stefania worked the long summer season at Giovanna’s stabilimento, Bagni Maddalena, in the small village of Arenzano. Just a short distance down the coast from Cogoleto, Arenzano is the first independent town outside of greater Genoa to the west, towards France, and it’s also the first stop for Milan city dwellers as they head for the beach. Bagni Maddalena occupies approximately a thousand square meters of pebble beach, densely covered with one lounge chair per meter and gabled changing cabins that act as borders between stabilimenti, because Bagni Maddalena is a private, members-only establishment. Its members have been returning since the 1970s, when Giovanna’s father created Bagni Maddalena out of an ice cream stand.

When Stefania started there in the 1990s, Bagni Maddalena was still a blue-painted wooden structure, dismantled every fall and reassembled every spring. In the 2000s, Giovanna invested in a permanent structure on the beach, at an expense of over one million euros. She owns the restaurant, a tasteful and well-built building of glass and concrete and tile; but she doesn’t own the beach it stands on.

A slide show plays across the screen behind the stage with images of beaches and text that reads, “Does confiscating 30,000 stabilimenti balneari really help Italy?” Meanwhile, both the man in the old-fashioned bathing costume and Monti’s head have made their way through the crowd to the stage. “I’ve brought greetings from the Prime Minister,” the head says, and the boos and whistles start anew.

The mayor of Rome is up on the stage next, telling the crowd what he’d tell the EU parliament: the stabilimenti balneari are not providing a service, he says, it’s a bene. A tangible good. The owners of the stabilimenti are the custodians of the beaches, and they’ve turned the sands into national property; since the Bolkestein directive was designed to cover services, not goods, the stabilimenti shouldn’t fall under this law. Like Stefania and Salvatore, who’ve paid for public sidewalks and wheelchair access to the beach above their kiosk, all these owners have added economic and cultural value to the Italian coastline. “Tell the people in Brussels that this is unacceptable!” he says, to loud cheers from the lifeguards.

Outside the auditorium, the sky is blue. Light clouds drift by pine trees pruned into the shape of broccoli; the parking lot is paved in a fish-scale pattern of grey and white stones. As people hang out on the steps, the mayor exits the auditorium, surrounded by a tight knot of journalists. A pair of policemen in full uniform look on listlessly as he climbs into a modest car and is driven away. There is no resolution for this protest.

In 2002, Stefania and Salvatore got very lucky. Their father found a beach bar, the Stelvia, for sale and made its ailing owner an offer for the licence. The licence for a full-fledged stabilimento like the Bagni Maddalena is valued between five hundred thousand and a million euros; the Stelvia wasn’t a stabilimento, but a kiosk authorized to provide services on the public beach. Its licence includes selling food and alcohol and renting umbrellas and chairs by the day on a stretch of beach measuring a hundred square meters. Stefania and Salvatore renamed their kiosk “Calabasciu,” Sardinian for “Come on down to the beach.” Up went a Sardinian flag with four black bandanna-covered heads separated by a red cross on a white background. The town of Cogoleto allowed them to operate a disco on Saturday nights; Stefania went to bartending school, and Salvatore DJ’d. Word spread, and their clientele grew.

In 2008, Stefania and Salvatore applied to add a part-time restaurant and more seating to Calabasciu. Four years later, just after the protest in Rome, Cogoleto granted the siblings a one-time, now-or-never permission to add on to the kiosk. At the same time, Stefania learned that she was pregnant with a long-awaited child. She’s thirty-seven, and it’s a risk; not just the physical risk of being an older mother, but a major financial risk to have a child while her job is uncertain. Yet this is Stefania’s last chance at parenthood, she thinks, just as this may be the family’s only chance to expand Calabasciu.

Calabasciu supports three generations, including Salvatore’s two toddlers and a cousin. Working on the beach is hard manual labor, and the pay isn’t high; since opening in 2003, the siblings haven’t paid themselves more than 20,000 euros a year. Everything else went into saving for Calabasciu’s future. They crossed their fingers and invested those joint savings into an expansion. May and June of 2012 were lost to construction, haggling over permits, and daily thunderstorms that brought unseasonable cold to the beach.

In July, summer arrived: sun-heated sand, children playing between lounge chairs, and lazy bathers cooling their ankles in the shallow waves. Calabasciu’s blue and white umbrellas bloomed next to the orange-and-brown, yellow and white ruffled parasols of neighbouring establishments.